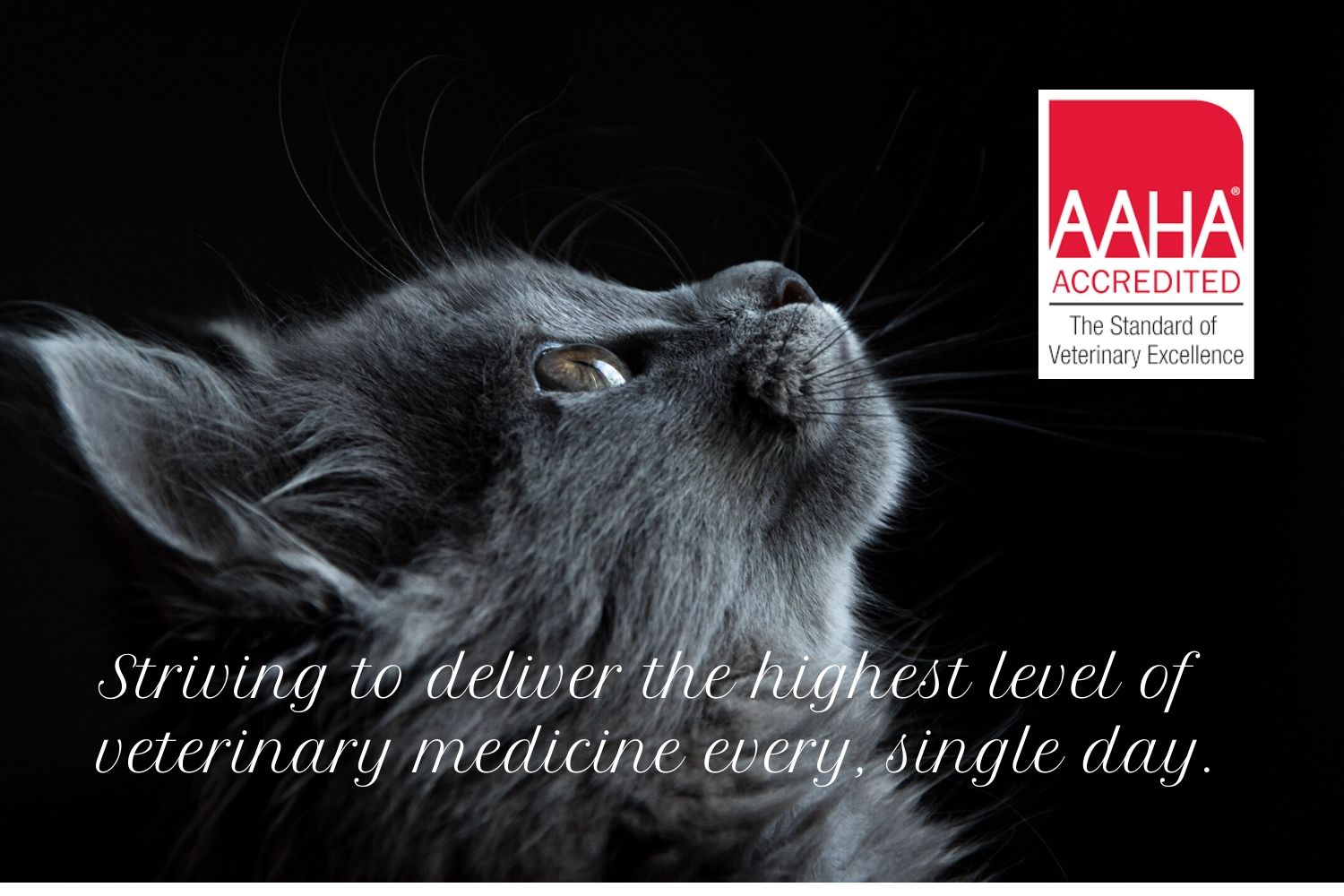 Have you heard of the American Animal Hospital Association (AAHA)?

Probably not. And why would you?

Maybe you think the AAHA is some backwater acronym for a minor hockey league in Manitoba. Perhaps you’ve read a pet health blog or website that mentioned AAHA Accreditation. Or, maybe you’re familiar with the red-and-white logo you’ve seen at the entrance to the Cabbagetown Pet Clinic.

What do we know – or care – about AAHA Accreditation?

Unlike human hospitals, veterinary hospitals in Canada do NOT require to be accredited by any specific regulatory body. AAHA Accredited animal hospitals are the ONLY facilities that choose to be evaluated on over 900(!) quality standards that go above and beyond basic provincial regulations.

What is the American Animal Hospital Association (AAHA)?

The Standard of Veterinary Excellence.

Established in 1933, the AAHA has focused on promoting high-quality standards for the constantly progressing segment of small-animal practice through accreditation and other initiatives.

The original directors were convinced that it was necessary to provide better protocols and methods than were generally available for small-animal practices.

That philosophy is still alive today as a guiding principle of the AAHA. It has helped inspire and sustain the growth and development, not only of the AAHA but also of the practice of small-animal medicine throughout Canada and the United States.

“Enhance the abilities of veterinarians to provide quality medical care to companion animals.”

“Enable veterinarians to successfully conduct their practices and maintain their facilities with high standards of excellence.”

“Meet the public’s needs as they relate to the delivery of small-animal veterinary medicine.”

The AAHA Standards of Accreditation were developed to push this mission and has established itself as the leader in developing benchmarks of excellence, business practice standards, informative publications, and educational programs – all designed to help veterinary practices thrive.

“Seeks to lead the profession in the provision of the highest quality of care for companion animals by improving standards of care, championing accreditation, and supporting our member practices in all aspects of this pursuit.”

The American Animal Hospital Association (AAHA) is the ONLY organization to certify animal veterinary hospitals across Canada and the US. Today, more than 4500 practices (12-15% of all veterinary practices) are AAHA-accredited.

More information about the American Animal Hospital Association (AAHA) can be found at aaha.org

Why AAHA Accreditation is Important to our Cabbagetown Pet Clinic Clients.

At the Cabbagetown Pet Clinic, we believe becoming an AAHA-accredited veterinary practice wasn’t about prestige or status – it’s about operating at the highest level. It’s a way to force ourselves to be the best we can be – our dedicated staff is constantly looking to make things better.

The accreditation process is challenging, rigorous, voluntary, and not guaranteed. When we made the promise to step up to become accredited, we were making a statement that our practice is committed to excellence to our clients in Cabbagetown.

To become AAHA Accredited, we were required to undergo a rigorous evaluation process to ensure we met ALL of the protocols prescribed by the AAHA.

These include these areas:

To maintain accredited status, we undergo a wide-ranging, on-site evaluation every three years to certify that we are compliant with the AAHA’s mandatory standards.

The Case Against AAHA Accreditation ?

We’ve heard the argument that the stringent AAHA requirements are too rigorous and costly to put into practice, and that those costs get passed onto our clients.

Is there a downside?

No. We would say it’s a commitment to a higher standard by the Cabbagetown Pet Clinic and our clients to go the extra mile and ensure their pets receive best-in-class treatment and preventative care. If that’s considered a downside, we’ll accept that. By the way, our pricing structure is reviewed regularly and is always competitive across the entire Toronto market.

We recognize this difficulty, but this did not impede our cozy and welcoming facility in downtown Toronto in pursuit of accreditation.

So, it costs too much? If a practice is still operating with policies and procedures instituted 30 years ago, it seems hard to fathom (but is still possible) that your pet is receiving the latest advances in technological and preventative care.

When purchased in 2008, Cabbagetown Pet Clinic made the commitment to invest in the process to ensure the clinic was prepared to meet the challenges of the stringent AAHA procedure. We were accredited in 2012.

This may be true in some cases, but clients do their homework nowadays and capable of doing research that will put them and their pets in the best possible situation. If more hospitals (currently 12-15% are accredited) worked harder to gain certification, then clients would come to recognize what AAHA means when they see the plaque on the door or the logo on the website.

Eventually, there will be a tipping point – likely initiated by an increasingly highly educated client base – where the majority of practices feel it’s in their best interest to welcome the extra pressure to perform and meet this high AAHA bar. Until then, we will proudly continue our ongoing obligation to meeting (and exceeding) the latest AAHA requirements.

As more practices get onboard with AAHA, we feel that professional practice standards in the veterinarian community will rise and pets everywhere will receive better care.

AAHA and the Future.

Since AAHA was founded, everything they represent has been done has been with one goal in mind: to help veterinary professionals provide exceptional care for companion animals.

At the Cabbagetown Pet Clinic, we are driven to ensure that your pet is happy, healthy, and has access to the latest innovations in veterinary medicine so you and your pet can enjoy a long, wonderful life together. 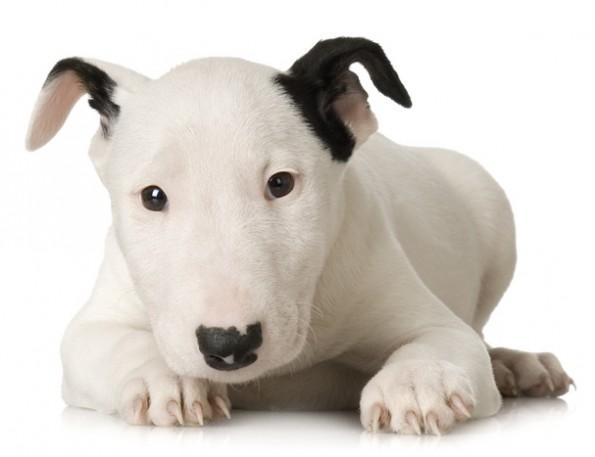 DCM and Grain-Free Diets for Dogs

It’s natural to get concerned anytime that we see a news headline implicating a negative relationship between our pet’s health and wellbeing and their diet.

At Cabbagetown Pet Clinic, we have been fielding many calls about a recent report released by the Food and Drug Administration’s Center for Veterinary Medicine (CVM) in the United States (dog food manufacturers are NOT regulated in Canada). This study was initiated after the FDA received 515 reports of Dilated Cardiomyopathy (DCM) in dogs between Jan. 1, 2014 and April 30, 2019 which appeared to link dog breeds not typically susceptible to DCM genetically, and diets predominately labelled and marketed as “grain free”.

The report details FDA’s ongoing investigation into a “potential connection between certain diets and cases of canine heart disease”. We feel its important try and set the record straight and to help reduce some of the anxiety surrounding its recent findings.

You can read the full report here:

At this time, there is no verifiable evidence that these ingredients are a primary cause of DCM, but dog lovers should be aware of this alert and it’s ongoing investigation.

What is Dilated Cardiomyopathy (DCM) ?

Dilated Cardiomyopathy (DCM) is a serious disease affecting the heart.

Canine DCM occurs when the muscle wall of a dog’s heart thins, thereby weakening it and making it more difficult to pump blood. Congestive heart failure, irregular heartbeat and sudden death can result.

There a many factors that can lead to the development of canine DCM. Genetics appear to play a central role in the predisposition some dog breeds (Dobermans and Boxers have had specific genetic mutations identified) which makes them more susceptible to develop DCM.

One factor of concern with respect to nutrition, which is the focus of this report, is a deficiency of some amino acids (namely taurine and carnitine) or other nutritional components in the diet which may be causing an increase in cases of DCM in dog breeds not known to have genetic predisposition.

The FDA has not come to a definitive conclusion with respect to why “grain-free” dog food diets are suspect. The only common relationship that investigators at the FDA have observed is “grain-free” diets that use peas, lentils and other legumes and/or potatoes listed as one of the main ingredients appear to be associated with an increased incidence of canine DCM. There are currently many theories, but no conclusive answers clarifying how these diets can intensify this condition.

The indicators of DCM differ depending on the breed of dog and at what stage the disease has progressed.

What should I do if my dog eats a grain-free, legume-based or other implicated diets ?

To be clear, the FDA is not advising dietary changes based solely on the information gathered to date.

How did the FDA compile the list of brands ?

Of the dog food brands on the FDA’s list, 91% of the products were labeled grain-free and did not contain corn, soy, wheat, rice, barley or other grains, while 93% contained peas, lentils, chickpeas and beans, or potatoes. The common thread appears to be legumes, pulses (seeds of legumes), and/or potatoes as main ingredients in the food.

The FDA does not believe these cases can be explained simply by whether or not they contain grains, or by brand or manufacturer. Brands cited by the FDA most frequently (as of April 30, 2019) that had at least ten reports include: 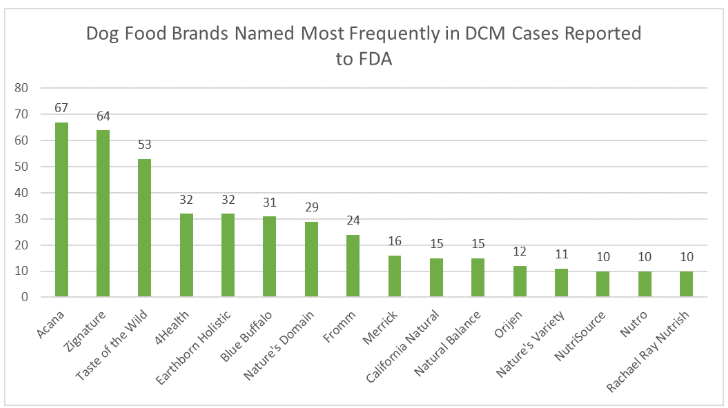 Currently, no therapeutic diets manufactured by Hills, Purina or Royal Canin have been associated with cases of diet-associated DCM.

Has the FDA recalled any of these brands ?

No. It is important to note that the FDA has not recalled any of the brands mentioned above. The potential connection between these foods and canine DCM has not been definitively confirmed, and there’s not enough conclusive data indicating that the aforementioned brands need to be removed from the market.

To conclude, the FDA is continuing to investigate and gather more information in an effort to identify whether there is a specific dietary link to development of DCM and will provide updates to the public as information develops.