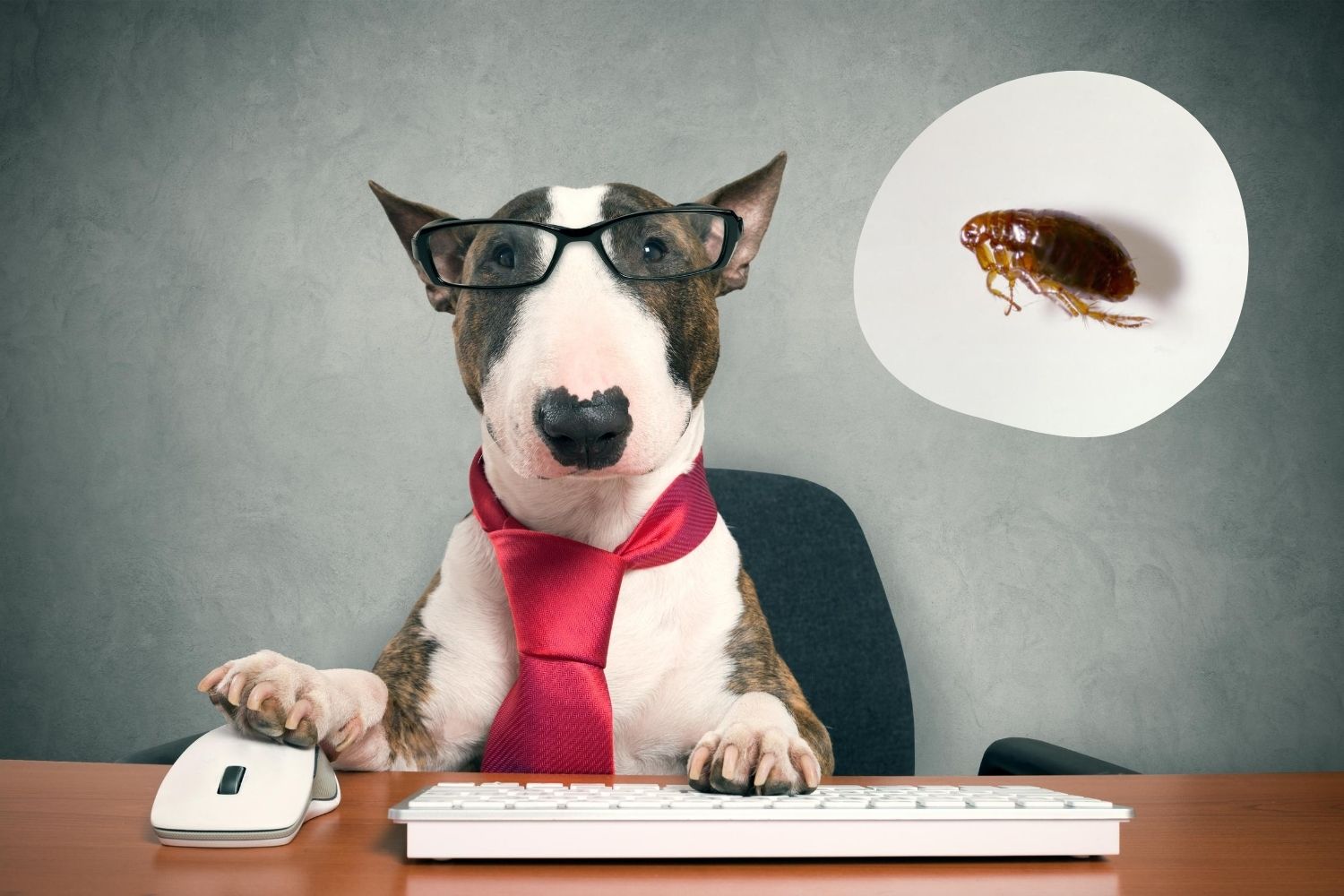 Fleas are annoying, little creatures that we’d rather not think about.

These tiny, blood-sucking parasites irritate your pet and can infest your home, often before you realize that they’ve have moved in. If you and your dog are scratching your heads and you’re wondering how to address dog fleas, we’ve got your covered.

MEET THE ENEMY: THE NOT-SO-HUMBLE FLEA.

Fleas aren’t just an annoyance, they can cause serious health issues for you and your pet. Fleas exist to live off the blood of its host. As far as we know, they have few benefits to an ecosystem outside of feeding on the sick and weak in animal populations.

MYTH:  My pet is indoor-only, so it can’t get fleas.
FACT:  Fleas – in all stages of the life-cycle – are easily transported and thrive particularly well in the regulated temperatures in your home. This means that even if your animals never go outside, they are still susceptible to fleas.

THE LIFE CYCLE OF FLEAS

Across the planet, there are more than 2500 different types of fleas. The most common type afflicting dogs and cats in Cabbagetown is called Ctenocephalides felis – the cat flea.

There are four life stages of this unassuming pest. For successful flea control, you need to know how to break this life cycle at any one of these points. The entire flea life cycle can be completed in as little as three weeks and having just one (!) flea get into your house can be enough to start an outbreak. An adult female can give birth to as many as 500 eggs within her short lifetime.

MYTH:  My pet can’t have fleas because I haven’t been bitten.
FACT:  Ctenocephalides felis does not prefer human blood and won’t snack on it unless absolutely necessary. Humans tend not to be bitten unless flea populations are excessive.

WHERE DO FLEAS COME FROM?

Most companion animals have had or will pick up fleas at some point in their lives, much to the frustration of careful pet parents.

Why does my dog have fleas ?

Being sociable creatures, the most common way your dog will pick up fleas is from the environment following contact with other animals. On a daily walk, or even in your garden, your dog could come into contact with birds, rodents, rabbits, squirrels, foxes and deer, or places they’ve been, all of which might have fleas.

Unfortunately, uninvited fleas can easily break into your home and make it their house too. Flea eggs in the home environment can hitch a ride on people’s clothing, and fleas can be carried by pets visiting you, and on nesting wild animals, such as mice that might have set up camp under your floorboards.

Indoor areas where other dogs frequent pose a risk of fleas for your pet. Doggy day care, dog parks, veterinary practices, grooming facilities and boarding kennels are not always guaranteed to be free from fleas. Despite often strict rules requiring dogs to be flea free in these facilities, treatment varies from dog owner to dog owner, so fleas can easily find their way in.

If you’re travelling abroad with your dog, they will be exposed to different bugs and the diseases they carry. But in warmer regions, fleas are a particular risk because they are able to survive for longer periods in the open environment without a host, waiting to jump on your dog.

MYTH:  We can’t have fleas because we deep clean our carpets regularly and have hardwood floors.
FACT:  The cracks between boards of hardwood floors are a great place for the life cycle of a flea to flourish, not to mention wall-to-wall carpeting.

7 WAYS TO SPOT THE SIGNS OF FLEAS

Given their tiny size, it can be a challenge to know if your pet has fleas. But there are some telltale signs. Maybe you spotted some tiny specks around the house that you might’ve missed before. Maybe that beautiful hair coat that was so thick and luxurious is looking thinner. Before you know it… fleas.

If you spot your cat or dog scratching, and suspect fleas, use a very fine-toothed comb through your pet’s fur, checking for small brown shapes moving about. Look especially closely for signs of fleas by the ears and tail of your cat or dog.

They can be seen with the naked eye.

They’re reddish-brown, very thin and are about 3mm long. Without a microscope it’s really difficult to see the details what they look like (probably just as well), but they do have large back legs, enabling them to jump almost a 1/2 meter in a single leap.

They leave behind lovely parting gifts.

Keep an eye out for what’s called “flea dirt” – particles that look a like a speck of pepper. This is the fecal matter that fleas deposit on its hosts. As it is primarily composed of ingested blood, it will turn the red on a moistened on a tissue.

You can spot it on your pet’s skin, or be left behind in places like:

Tiny white ovals – flea eggs – fall off into the environment around it (your bed, the dog bed, the carpet, that favorite chair), only to hatch a few days later into flea larvae. Larvae is visble – they’re tiny, worm-looking objects with brown heads that will feed on all those specks until they wrap themselves up into a cocoon called a pupa. If you see tapeworms – parasites that are white or pinkish white and resemble little pieces of rice – in your pets posterior, that’s a sign it may be having a bout with fleas.

From all the itching, scratching and biting. Fleas often gather at the neck and shoulder blades of your pets. The base of the tail and along the back of the legs is a favorite hangout, also.

If you can get past your pet’s coat and look deeper at the skin, flea bites usually reveal themselves as tiny, raised red dots. This can lead to Flea Allergy Dermatitis (FAD), a hypersensitivity to flea bites. If your pet has this, their skin can become itchy, red, and scaly.

Pale gums are often an indication of anemia. With larger infestations, some pets – especially smaller kittens or pups – could be in danger due to a loss of red blood cells. Fleas are thirsty and can take in up to 15 times (!) their body weight in blood.

MYTH:  If my pet had fleas, I would see them in their fur.
FACT:  You can’t always expect to see fleas in your pets fur because pets will scratch, lick, groom, and chew after being bitten. The fleas are either ejected or get swallowed.

The flea and tick treatment marketplace features numerous generic drugs that are available over-the-counter. As generic options, these drugs offer generic solutions and are more affordable than prescription medicines.

It’s always best to discuss the benefits of using any specific over-the-counter flea product with our vets before considering a purchase. These medications could behave differently than described given your pet’s current condition and medical history.

If you choose to go the over-the-counter route to treat your pet, you need to decide which medication is the most effective and more importantly, which is the safest. While most over-the-counter products work well, they should be used with caution – overdoses are possible and some products cause unintended side effects.

Bottom line ? Do your research.

Why should I consider prescription flea medication ?

Given any number of medical and environmental factors, your pet’s circumstances are unique. Prescription drugs work effectively to treat specific concerns and address your pet’s unique dosage needs. This is where our veterinarian’s advice is invaluable.

Our veterinarians recommend an examination before using any prescription flea, tick or heartworm medication, in the event of any possible adverse reactions. Changes in body weight, current drug interactions and/or undetected medical conditions can result in the reduced effectiveness of generic treatments and may cause harm to your pet.

We offer the latest in prescription medicines – Simparica Trio™ – that offer complete parasite protection against fleas, ticks, heartworm, hookworm and roundworms all in one yummy, chewable tablet. 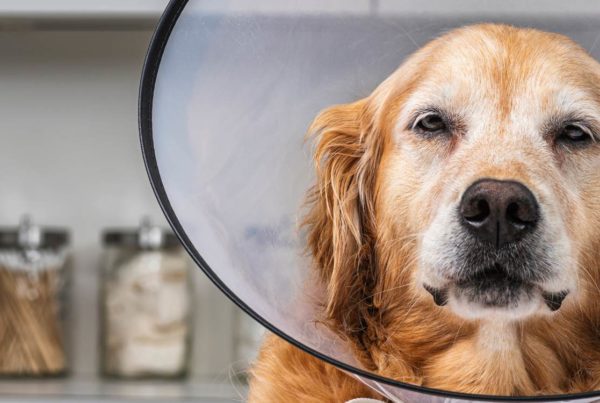 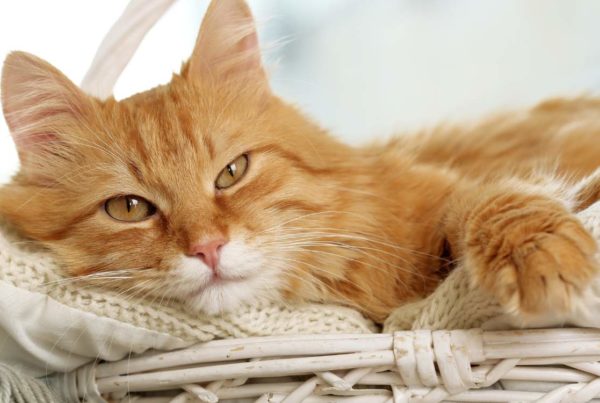